Beak To Beak- Eye To Eye

Recently on one bright early Monday morning, I opened the front door to start my morning walk. A delightful cool summer breeze greeted me.  As I was about to turn around and head back into the house to put on my shoes, I had a very rude awakening. In front of me on the doorsteps were hundreds of bird feathers of all sizes. No body was to be seen, but it was clear that somebody had lost a battle. It was hard to imagine that anything could have survived that much loss.

I looked up at the nest in the eaves and wondered if the bird that seemed to have lost its lost life, was the mother who had been sitting on the nest. I had seen one baby bird so I knew that someone was probably motherless.  During the day, I continued keeping an eye one the nest. No mother appeared and my uneasiness grew. What if she didn’t come home? How long could the bird survive?   How did I know that there was only one? I didn’t.

Finally, I couldn’t stand it any longer and got out a ladder and propped it open near the nest. This was a new adventure and I didn’t know what the bird would do if we were face to face. Calm. Keep it calm I told myself. I reassured myself that I could handle anything even the sight of a dead body. I knew that whatever was in the nest was too young to fly off or it wouldn’t be there. Therefore, it wasn’t likely that a flying bird would attack me!

As I reached the top of the ladder, and got a closer look at the nest I had to admire it’s beauty. Somebody or some bodies had taken great care in designing and putting this together. (Now if they could only construct a house like this!) I had to remind myself that this was indeed someone’s home. I looked up and saw two very small birds in the nest. One was larger than the other. They started making a squeaking noise so I walked back down the ladder, not wanting to add more stress to an already stressful situation.

I knew that I probably didn’t have much time to figure something out and went into the creativity department of my brain to come up with some ideas. There was no experience to focus on or return to. There were no bird rescues, only visits with people who love and live with birds. That was all and that was not enough!

My afternoon was busy with an acupuncture appointment. I asked my Chinese doctor what he would feed two baby birds. “Take some cooked rice and mash it in the water that you cook it in and feed it to the birds through a straw. Wow, I was going to be looking into the beak of these newborns! Yikes! The very thought was both exciting and scary.

I came back home hoping that mama bird had returned and that I would NOT have to feed the babies or get them help somewhere from someone. No. No mother, no birds were anywhere near the nest. (Soon I would learn that when the mother doesn’t return to care for the babies, neither does the father.)

I contacted a few neighbors and quickly learned that they had no suggestions except to do something soon, because the babies wouldn’t last long without food or survive cool evening temperatures.  A call to a nearby pet store offered an option but not a good one. I could purchase an eleven-ounce bag of bird food and feed the two little ones daily. That sounded a little complicated so I called animal rescue. Of course, being understaffed and overworked, no one was available for a conversation. A recorded message allowed me to leave some details, a contact phone number and an address. I did not hear back that evening.

A little panic set in, so I decided to feed the little ones but couldn’t use the straw because their beaks opened and closed too quickly to get the rice mixture inside. They fluttered around, making little squeaking sounds. Obviously my efforts were adding to their stress. Instead, I found a bottle cap and poured the liquid into it. The larger baby drank from it, but the smaller one didn’t seem to know what to do with the liquid in the cap.

Bright and early the next morning, I could see a little head move about in the nest. Well, at least one had survived! I called back the local animal control office hoping to speak to a live human being. Luck was not with me. I did reach a person in another city department and was told that no one would be available for two days!

There wasn’t much left to do except call a humane society that hopefully took care of birds that needed some assistance. The second call was just the place. They had a bird sanctuary and would take the little ones. I was told to NOT feed them and bring them in right away.

Once again, up the ladder I went with a cardboard box to put the entire nest in it!  WOW the smaller bird was also alive.  Now it was time to move the nest.  I took a deep breath and moved the birds and the nest.  The entire nest went into the box thanks to the well-designed and constructed nest. Anyone watching would surely have been impressed

The birds stayed calm in the car, meaning that they didn’t squeak or flutter their tiny feathers during the entire twenty-minute ride. (Maybe they had been in a car in a previous life??? Do birds have previous lives?)   It took but a few minutes to fill out the paper work (where I lived, an address, where the nest was and an email and telephone number. I didn’t have a phone number for the birds, so I gave the humane society mine.) The birds were in the best possible care. Cross your fingers that they make it-please! 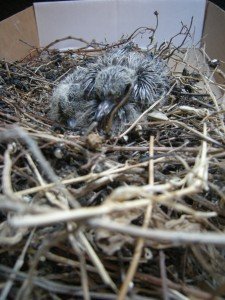