They aren’t always what they appear to be.  Yes, they have a cover.  The visible sign says “We Sell.”  Yes, that is what they do, sell drinks and some food, usually some things that add to your waist line if you eat too much or come knocking at your cholesterol door.

I am most familiar with wireless coffee shops because I seek refuge in them from my busy schedule to write on my laptop.  Sometimes if my karma is good, an empty table is available.  Better than that is a willing person who doesn’t flinch or look away if I ask to sit in the empty chair across from him or her.  Yet, the very best, is to have a conversation with THAT person who is sitting across from me about something that meaningful to this individual.  It is an invitation to a world that usually isn’t quite like mine.  One college student was taking an exam online while sipping on a cup of whatever hot beverage was in his cup.  Wow I thought to myself, I never did that.  Exams were taken in a classroom.  It suddenly occurred to me that this is probably very typical and nothing new, just foreign to me. I remember computers in college but not laptops and those big clunky desktop computers were not used by all students.  If my memory serves me, many students didn’t even own a computer! 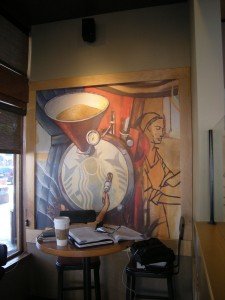 A few feet from me were to people discussing work. One was leaning over the table offering advice about searching for work.  It sounded more like a lecture than advice.  Perhaps the two are similar.

Across from my table, was a dark-haired twenty or thirty something year old bearded man deep in thought. He leaned over his laptop, typed something and then reached for his ceramic cup and repeated this over and over.

I talked a few more minutes with the young man sitting across from me.  Silence ended the conversation.  Silence that came after he glanced down at his computer in between  our conversation, which might be likened to a ping-pong game.  I got the hint-NO MORE CONVERSATION.

The next hour was filled with the more mundane.  The time was used to plan the rest of the week.- Anyone feel like yawning?