I can’t even count the number of times that I have said “cute” to a two-legged mammal  walking their four-legged  dog or sitting on a sofa besides a furry creature. (As I am writing this, I realize that no human thought that I was talking about him or her!!  No, that is right.  No one assumed that I was giving them a compliment , but then people aren’t accustomed to being called cute by strangers!!)

I always mean it or I wouldn’t say it.  However, there have been many times  when some proud person said “isn’t it adorable?”.   From the tone, it really doesn’t sound like a question.  It sounds more like a statement.   Now, what if  it is not attractive in my eyes?  For example, I remember the first time that I saw a hairless cat. It was in a park in the city of Vancouver, Washington.  A”You are beautiful”said the woman to the cat.  What was I to say?  “You are really ugly.  You look like something from another planet! ” (I have since grown to appreciate them.  It took awhile, I am sorry to admit.) So I smile, and hope/pray that nothing more is said so that I don’t have to invent something or be rude!! 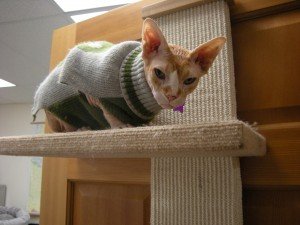 Sometimes the response that men and women have is different.  Women  are more likely to use the word “cute” or “adorable.”  Men often say “He/she is a good dog.” Sometimes I hear “really cute” to describe a puppy  or a kitten. And who might you suspect uses the word “darling” to describe a VERY cute animal?

Cute dog?  Is it much different from saying “Nice shirt” or “You look good in red.”  I am waiting for someone to  say  “Yeah, I know.”  I might be waiting a long time.