Animals are great examples for us in many way.  Most people talk about how animals are the source of unconditional love, understanding, patience, and more.  In my experience working with people and their pets, a lot, and I mean a lot  of people, prefer the company of their animal friends.  Now, not all of them will admit to this.  Some unabashedly say this with pride.  Forget people.  Have pets.  They are better than kids??!!  Yes, this is a controversial statement

Many people agree, that as a rule, many animals are better looking than most people.   Does this make you bristle?  However you you feel about animals or living with pets, they are more popular than ever before.  If you have any doubt, just look at the millions of dollars that we spend on them and the growing numbers of people who live with furry and feathery companions.

The one thing that I seldom hear about our friends of a different species is how simply they live. They are very efficient and have a tiny carbon footprint. (No, I am not talking about cows.)  Think about it. They don’t take up a lot of physical space.   They don’t have big energy consumption behaviors.  They walk around in neighborhoods or around the block.  They are often transported in cars with their people or better yet, run along side them on sidewalks.  Some go no further than the parameters of their living space.  Left to their own devices, they don’t consume foods from far away places!

Perhaps we can learn a few things about talking care of this earth from them1 My friend Norbert also has a small footprint, except every few years when he takes a trip to Europe1  He lives in a bus, doesn’t use  much electricity.  He doesn’t have a refrigerator. He uses other people’s to store foods when he needs to.  He consumes lots of local fresh fruits and vegetables and shops often.  Opps, I neglected to say that he sometimes stores food for a short period of time under his bus, which is well wrapped.  Yes, he got the message of living small and probably not from animals!  He figured it out on his own.  He would say that it wasn’t a difficult conclusion. 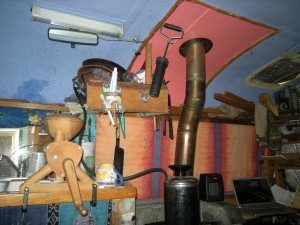