I know that many people in southern California are wishing and hoping for rain.   Actually it wouldn’t be surprising if somebody or some bodies somewhere are doing a rain dance begging for liquid from the sky.  It has been a long time since Southern Californians had any REAL rain.

Sometimes it is a relief that it isn’t raining on one’s parade because a lot of time, sweat and thought has gone into planning and executing special occasions.  This last Saturday, October 19th was one special day when the Stray Cat Alliance organization in Los Angeles did NOT want rain. They got their wish. The fundraiser, an annual event to help cats in the ways that they need assistance, had its 13th event.  What an event it was!!  Over 250 people attended this fundraiser that was held at a private resident in the hills of  the west side Los Angeles.

The event was attended by a few celebrities, including actors, cat lovers, Francis Battista, founder of Best Friends Animal Society, Jackson Galaxy with Animal Planet “My Cat From Hell”, Lucy Nolan from NBC channel 4 in Los Angeles, Los Angeles Mayor Eric Garcetti and a few others.  These and the other guests were present to support cats in need with their dollars.

I hope that the Alliance raised a great deal of money for al their efforts and I hope that this is true for all the cats that need help.  I must say that I was IMPRESSED that this group was able to “rent” a home from a celebrity for the evening and have food, drinks, auction, etc., happen without too many obvious glitches.

I was there, along with a few others, to offer my pet and people consultations.  Along with a photographer, a magician and a few other cosmic readers, we hopefully added a splash of suspense, intrigue and excitement to the evening. 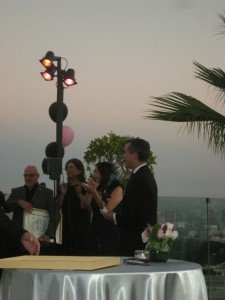