For you food lovers, cooks and the rest of you who eat FOOD is this real?  This is my question. Do people make blueberry jelly with bay leafs? Yes, I would REALLY like to know.  Perhaps blueberries with a hint of bay leafs are natural compliments.

It isn’t what most associate with the leaf.  Sauces and stews and powdering the leaf to distribute over a piece of meat are more common.

Don’t want to eat it. This leaf can be used to keep unwanted critters away. Put a few leaves in your sugar jar or on your kitchen window sill and see what happens.

Bay leafs are from the laurel family and come from well-known places like California and Turkey.  Long, long ago, before the invention of olympic medals, bay leaves were used to make wreaths for Olympic champions.

Do you know that bay leaves are a herb, not a spice. What is the difference ? Basically, herbs come from the leaves and are used for savory uses in cooking and sometimes for medicinal value.  Spices, on the other hand, are used less often and are often harvested from roots, flowers, seeds or bark.  Spices are often more potent and stronger in flavor than herbs. Here is a link to a helpful herb and spice chart http://www.realfood4realpeople.com/spice.html

I don’t remember when I realized that it didn’t come from a can at the grocery story.  I don’t even remember seeing it in bottles.  It wasn’t an herb that my mother often used.  My grandmother, who lived next door, would quickly remove a leaf from a jar and just as quickly let if fall from her hands into a pot of something she was cooking.

I because more aware of bay leaves for two reasons.  I started buying herbs and spices in bulk. Spice stores became my friends, along side of people, trees, food, empty pages, poetry, novels and a long list of other things more and less personal but not THAT unusual.  Hours could be spent examining jars, wondering if all four cinnamon glass jars were really that different.  A whole world opened up to me.  I never knew that there were so many varieties of black pepper or that I could purchase stevia that looked like little twigs.

Rows and rows and shelves and more shelves greeted me in stores.  What is this?  What do you use that for?  Sometimes I got answers to my questions from other shoppers and store employees.

I am used to herbs and spices being costly.  The labels on the glass gallon jars list the price per pound.  Who and how often do people buy an entire pound?  How much paprika can one use at one time?  Many cooks spices and herbs that they add to their pots of soup, casseroles, meats, etc., to be as fresh.  They may purchase small amounts knowing that the freshness doesn’t last for more than a year or two.

Months later, I began looking for bay leaves.  If I could find them, I could dry them and share them with others.  I had no idea what a bay leaf tree looked like.  I asked several people.  Only one person  had a small tree, too small to have many leaves.  I gave up searching.  A few weeks later I was talking to neighbor who wanted to show me his back yard trees.  “Do you know what a bay leaf tree looks like?” I asked.  He pointed and said “here” and gave me all the leaves I wanted.  Bay leaves anyone?  I am willing to share. 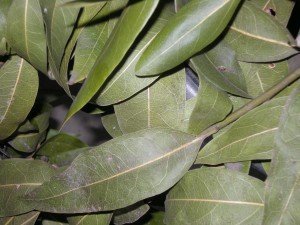