was recently visiting with a friend in Janesville, Wisconsin at a Perkins Restaurant. There were four of us enjoying conversation over lunch at Perkins Restaurant.   My friend’s daughter and her  almost two year old daughter were  also there.  We hadn’t seen each other in about three years so we  had a lot of ground to cover.

It didn’t take us long to catch up.  My friend and I had something in common that we discovered over lunch.  Both of us were visited by butterflies after

A Message From Grandma?

we lost a parent.  My father passed away three years ago and she lost her mother almost two years ago.    She started telling me about other family members who had passed away  over the passed two years.   Her daughter chimed in.  “Wasn’t it weird how a butterfly landed on your leg right after grandma died?”  That caught my attention.  Right after my father passed away, I saw two white butterflies on the hillside behind behind my parents’ house.   This was the third butterfly story  about a butterfly appearing after a person passed away. The other story I heard on a radio show from a co-host who observed butterflies appearing not long after his father passed away. 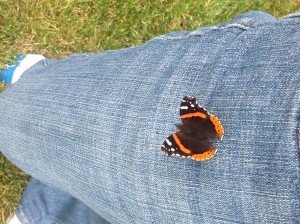