I have yet to hear that losing a pet is easy. People sometimes say that the letting go process was a little easier because the pet’s quality of life was reduced by pain, age, etc. A void is created and we are left with our photos and memories.  Sometimes the loss is so great that people rush to find another pet to avoid feeling the pain. This may be done on behalf of other family pets or humans and sometimes both.

(Pets also grieve the loss of humans and animals. I have heard stories of dogs waiting at the edge of their driveway for their deceased canine friend.  Some animals exhibit signs of loss of appetite and listlessness after losing a beloved one.)

After losing a pet, some people vow to never get another pet because they don’t want to feel that much emotional pain. Others wait until they are emotionally ready to love again, meaning some healing has occurred.

Big Hole In Their Lives and Heart

A client lost one of her two collies.  Both she and the remaining dog missed the dog that had died. There was a big hole in their lives and their hearts. She did not know if she was ready to bring another dog home. She didn’t have much time to think about it when she learned that a collie needed a home. She decided to take a chance and visit the rescue dog. The two met and she still wasn’t certain if she was ready or if the dog would fit into her family. Would the dog be a good fit? Could and would the two dogs become friends? These were important questions that had no answers.

She Discussed The Situation

She went home and thought about the dog and her dog at home and then decided to take her dog with her to make a decision. If the two dogs got along, she would bring the rescue home.  On the drive to meet the rescue, she discussed the situation with her dog. She let him know that if he didn’t like the dog, she wouldn’t bring him home with them. She imagined that her dog understood.

When they arrive, the two dogs met and seemed to like each other. She decided to take a chance and bring the dog home.  It took a few months for the dogs to get to know each other. The new dog quickly learned from the other dog. They are now best friends. 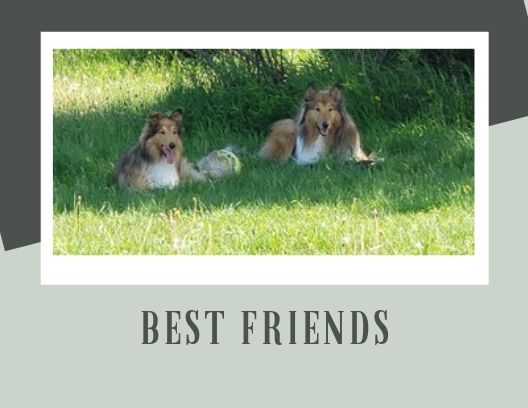