This  mime is a transplant from San Franciso has been silver spray painting his body for about twenty years.  His name is Wells Oviatt.  He calls himself The Silver Guy or Mr. Statue.  By posing absolutely still outside Pioneer Place and Saturday Market  in Portland, Oregon with every inch of his exposed skin painted metallic silver,he attracts enough tips to support himself and his daughter on donations.

I hadn’t seen him for a while, but that was my doing.  I had walked by where he was standing still.  I have to admit that I had forgotten about him and was a little surprised.  Perhaps I expected that the spray paint might have caused him some health problems.  Maybe he became bored standing still for large periods of time.  Maybe he moved to another city.  Maybe I don’t know anything at all and am just guessing.  However, I do have some questions: Did his intuition tell him how to stand?  Did his intuition tell him how long he could stand without moving?  Did he know who he could  and couldn’t scare by suddenly tipping his hat to thank an admirer for putting money in his tip jar?  Did he ever think that he would become such an icon in Portland? 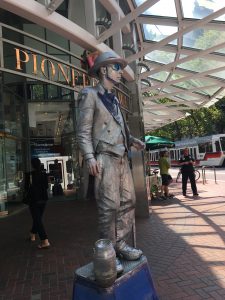 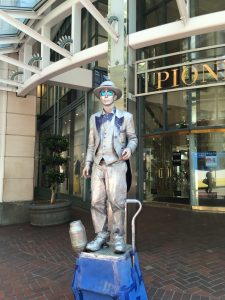 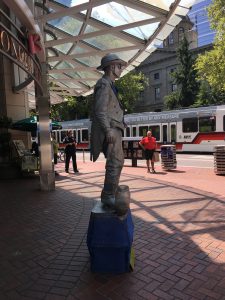