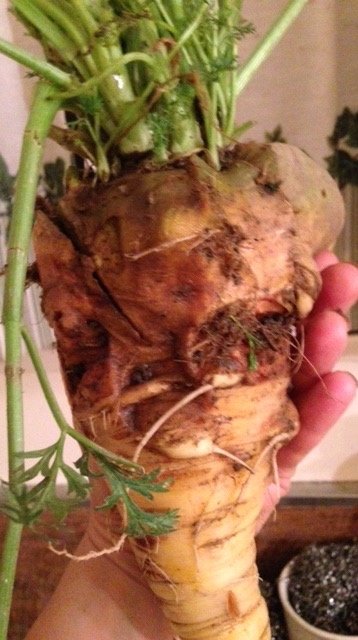 Who would think that a carrot, a commonly eaten vegetable, could change one’s mind, my mind?  Well, it did.  It happened one day while I was at a farmer’s market and walked past a vendor who was selling vegetables.  The sign behind him read “organic” so I asked him.  “Do you use any pesticides on your food?”  “No.”  I asked him because some organic farmers use some pesticides.

He  uses no pesticides, even though it is more labor intensive and expensive.  He continued describing what he does to prevent bugs and as he was talking I noticed that he was selling carrots.  They were small in size and he was charging $3 for the bunch, more than the $1.50 and $2 a bunch that many other vendors charge.

What was so special about these carrots?   I had to know so I bought a bunch.  As soon as I came home, I decided to try one carrot.  It was the best tasting carrot that I ever ate.  All I needed was one to fill me up.  It changed my perspective.  I then understood what food raised in nutrient rich soil tasted like- more nutrition, better tasting!  Now I look for food that is raised in healthy soil that sometimes isn’t so pretty.