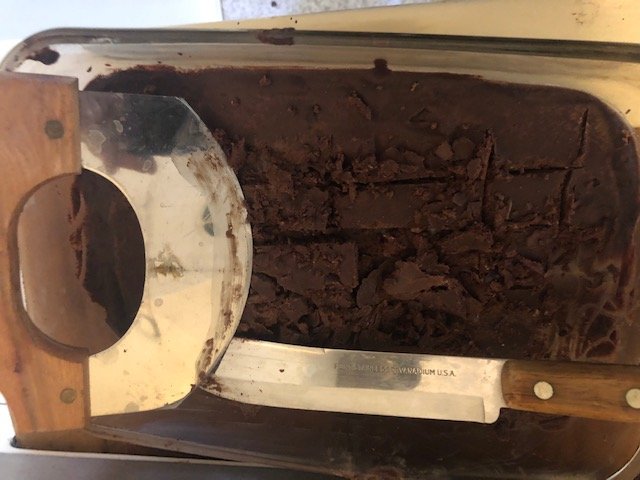 Maybe I thought that inspiration would guide me to open the roasted cocoa butter container and make chocolate. Commercial chocolate had sugar and additives that make most products far from pure and healthy. Could it be made without added sugars and regular sugar?

I read that it wasn’t difficult to make it, but I had no experience to prove it. I had come close to creating chocolate several several times. Close was not enough. The cocoa butter container still sat on the shelf in the kitchen cupboard. That was until last week when I decided to get brave. What did I have to lose, a bad batch of chocolate? Well, it couldn’t be that bad. How bad could it taste? The worst case scenario might be that I might have to throw the chocolate away.

Within the last week I decided to dive off the diving board and take a chance, a food chance. I was going to make chocolate, even if it wasn’t perfect, even if it doesn’t taste good.

So I looked up a recipe on the internet. Coincidentally, a friend sent me internet link for making chocolate and told me that it didn’t look that difficult. She was right. It was simple. The list of ingredients was short and included cocoa powder, a sweetener, and a few other items. I added my own touch, my signature- fruit instead of sugar.

I cooked up my experiment and poured it into a glass dish. Unfortunately, I hadn’t thought through what to do next. So, I made a mistake and didn’t let the chocolate cool down before placing it into the refrigerator. A few hours later, in the middle of the night, I woke and realized that the chocolate should not have been put into the refrigerator. It would be as hard as a rock. That is exactly what happened. Even a knife couldn’t cut through the chocolate.

I did the only thing that I could think of-post my problem on Facebook. Sure enough I got suggestions. I took the glass dish out of the refrigerator and let the chocolate soften. I rolled the chocolate into balls and then refrigerated them. They were delicious. Next time, and there will be a next time, I will think through what I want the chocolate to look like after I have stirred the ingredients.