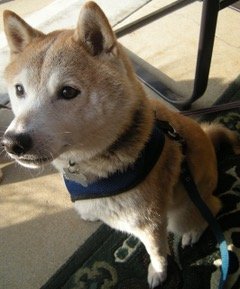 Or perhaps it would be more appropriate to write that ideas become more obvious when people take a walk and let the mind reveal what it knows.  It can be said that what we consciously know is only the tip of the iceberg.  Often more is revealed if we pay attention to our thoughts.

This happened three or four years after a conversation with Katherine. I used to walk with her and her two Shiba Inu dogs in the mornings.  Katherine really didn’t enjoy walking but she did it almost every day so that the dogs would get some fresh air and exercise.

She invited me to tag along and I did for months until I realized that I need to walk at a faster pace and for a longer period of time to get my heart rate up. Katherine couldn’t do this because she slowed down to let the dogs sniff the grass and pee.  She also stopped walking to talk to people she knew. Sometimes she had five minute conversations.

I was fascinated by Katherine’s stories of her mother.  Did she have longevity in her family?  Did she eat a typical American diet?  I had many questions and Katherine and I had lots of conversations about her mother.  She said one thing that puzzled me for a long time.  “Even though my mother was 104, I wanted her to live a few more years.”

Perhaps I should not have been surprised, except that I was.   Her mother had lived longer than most people, and likely more years than Katherine would likely because of her health issues and her lack of enthusiasm for life.

Recently I took a walk along the same route that Katherine and I and her two dogs had taken and thought about her mother being 104.  Then, I had an “aha” moment that came as I was walking up a hill and almost at the end of my walk.  It all made sense.  Katherine had a very difficult home life.  She lived with two mentally ill family members.  The dogs were her joy and so had her mother been.  Her ailing and aging mother still connected with her and their relationship was solid over the decades. Of course she wanted more time with her mother.

So, why had it taken a walk to make that crystal clear to me?  Why was this important to me?  Why was this revealed to me during thirty-minute walk years after Katherine made the statement?  There is no answer. What was more revealing was the importance of keeping present to the thoughts that surface when we least expect them.