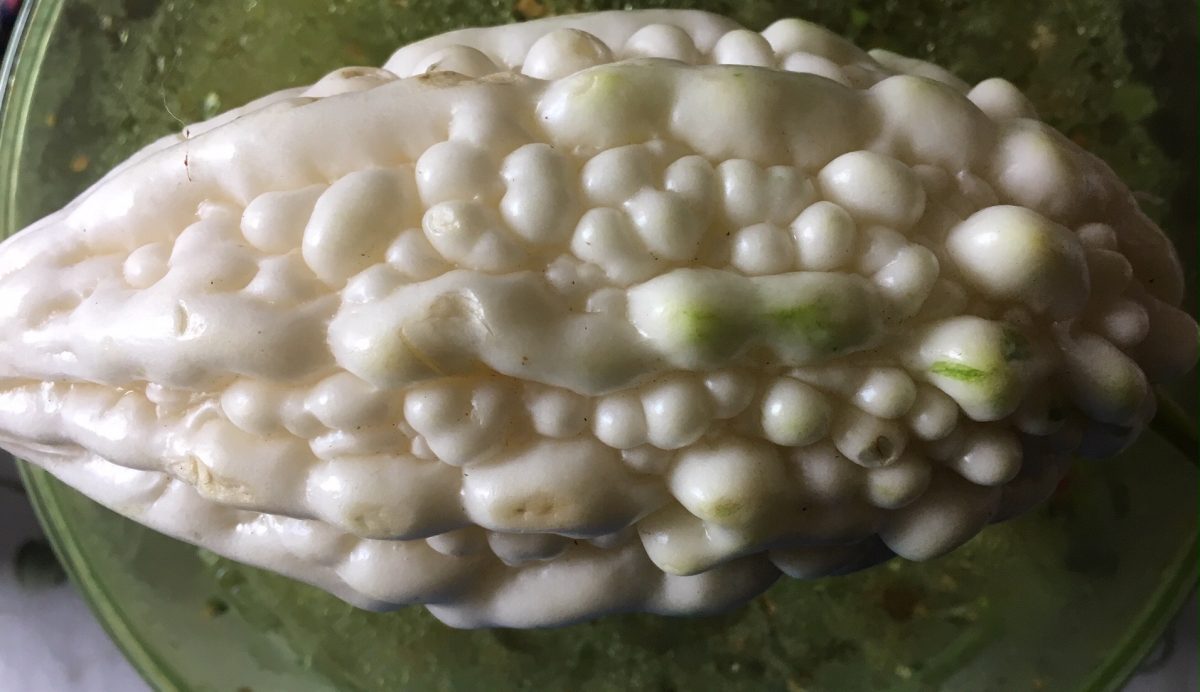 Bitter melon is what it is called.  I never knew that it is existed but it caught my attention at a farmer’s market.  It didn’t look real and actually  kind of resembled  something from a cartoon or a comic book.  At first I thought that it was a mistake, a reject.  it looked like it had warts and I wondered how easy it would be to sell something that looked like that.  I asked what it was and was told that it is bitter melon.  It is highly nutritious (a good source of thiamine, riboflavin, Vitamin B6, pantothenic acid, iron and phosphorus, and a very good source of dietary fiber, vitamin A, vitamin C, folate, magnesium, potassium, zinc and manganese).

I had no idea what to do with this vegetable-fruit.  Like most edibles there are more than one way to prepare it.  It could be steamed, cooled and cut open to remove the seeds before adding to soup or veggies or rice.  I did as I was told and added the cooked bitter melon to rice.  It was so awfully bitter that I could hardly eat it.  Ok maybe some tomato and onion might do the trick.  Nope.  How about adding a little soy sauce or sesame oil. Still awful.  So I did the only thing that I could think of,ask someone else.

I went back to the same farmer’s market and asked another vendor who was also selling bitter melon.  I was told to put the melon in ice -cold water and let it sit for a few hours before cooking it.  Ok I thought to myself I will do it.  So I did exactly as I was told but this time I cut up the bitter melon into small pieces and  put it into a vegetable soup.  It wasn’t so bad but that was only because there were other flavors in the soup.

Yesterday I decided that I was going to take a bus to the farmer’s market.  I walked to the bus stop and realized that I had not taken any money with me.  Back home I went.  I got the money and off I went to get the next bus, but the landscape had now changed.  I would have an extra forty-five minutes at the market  before the bus returning me home arrived.  Not a problem.  There were always questions and conversations to have with farmers and produce vendors.

Cook The Bitter Melon and Drink The Water

So I cruised by the tables and took my time inquiring about various cooking oils and cucumbers.  I was about ready to leave when I spotted one of my favorite vendors and went to her booth to say hello. We talked for a few minutes and I looked down at the vegetables that she was selling.  There at the end of her table was bitter melon!   Here was my opportunity.  “How do you prepare that?” I wanted to know.  “Oh.  just drink the water that you cook them in and you will get the nutrients from it” she said matter of factly.  I didn’t have to eat the vegetable-fruit.  There was my answer! 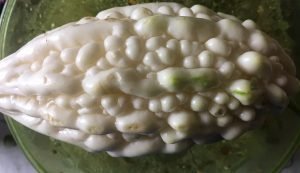