I wasn’t planning to give away organic coffee beans at the post office.  I just wanted to mail a padded envelope with two pounds of coffee to a dear friend.  It was a Saturday and the post office was about to close in thirty minutes.  I hope that it would be easy to find a parking spot and was crossing my fingers, all ten of them, that there wouldn’t be a long line.  I didn’t want to wait, but I was willing.  Have to say I hadn’t planned for a wait, meaning I didn’t have a magazine or a book with me.  As it happened, there were only a few people waiting in line.  Luck was with me that Saturday.

It was my turn and it just so happened to that the employee that was helping me LOVED coffee.  “Smells like coffee” she said.  I was surprised.  This woman had never said more than “next customer”, “how do you want to send it” and “that will be…” It wasn’t really surprising. The coffee was really fresh, roasted less than a week before I received it, making it much fresher than most store-bought coffee.

It was shipped from Just Coffee in  Madison, Wisconsin, a long way from the west coast, but I have found NOTHING better, and I have looked high and low in California, Oregon, Washington, Wisconsin,New York, Illinois,  and Oklahoma in coffee shops, Costco, Sprouts Farmers Market, Trader Joes, Whole Foods, restaurants, food coops, and in homes of friends and acquaintances.  Nothing matches this company.  It is not just me.  Everyone who I have served a cup of Just Coffee to or have gifted a bag of this precious coffee to want more or the contacted information to order their own.

The post office employee continued “smells really good.”   It is “really good” I told her.  The woman smiled and informed me that I was using the wrong bag and handed me her last bag that would cost me less money.  “Would you like to try some?” I offered.  She suddenly became a little shy.  ” No, that is ok.  Just give me the name of the company.”   I couldn’t help myself and opened an envelop that was lying on the counter, and put some coffee beans into it and wrote “Just Coffee and Madison, Wisconsin” before handing it to her.

Unbeknownst to me, two of the five women who were waiting in line, heard the conversation and joined in.   One asked “Can I have the name of the company?” I gave it to her and she quickly found it on her cell phone.  The second woman, also curious, stepped forward to look at the coffee bag.  ” Smell this” I said as I handed her the bag.  She inhaled and smiled.  “Grab the envelope over there, and I will give you some coffee.”  She found the envelope and handed it to me.  I gave her enough beans  to make a couple of coffee.  She thanked me and sealed the envelope and held it close to her body as though she had just received some something valuable.  She had  She would soon discover what I know.

“Have a great Saturday.”

The post office employee, was smiling and waiting to help me send me coffee.  I paid the shipping fee, and turned to the people behind me who were still focused on the coffee conversations.  ” Have a great Saturday” and I walked out feeling “high” from my post office coffee experience. 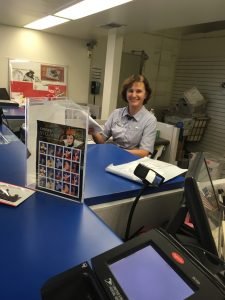 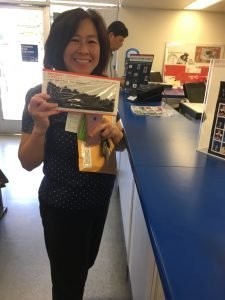