Three month ago Rick Best and Namkai Meche tragically lost their lives on trimet, a public train in Portland while attempting to d-escalate the raging white racist who was yelling racial slurs at two women, one black and one Muslim,  who was wearing a hijab.

I was not in Portland at the time and learned about the tragedy while talking on the telephone.  It would be an understatement to say that the killings rattled me. I could have been on that train.  I take it often.  Yes, I could have been one of those riders.  The stop where the killings happened is my train stop.   Yes, I get off at the Hollywood station.  Therefore, it was easy  to imagine being on an overcrowded train that Friday wanting to get home, perhaps holding on to a metal pole on the train or some other non-moveable object while I stood on the train.  Perhaps I would have witnessed  the killer’s rantings and the two men attempting to reason with the man who Friday afternoon.  It must have been impossible not to  feel the tension that certainly permeated the air.  What about all the riders that Friday afternoon?  Were they terrorized?  Do they still suffer?  Some of them must have seen blood and heard screams.  How does one recover witnessing such violence?

You, too, may have heard about the killings in Portland, Oregon.  The deaths made international news.  Politicians and newscasters are still referencing the killings.  Some Portland residents, including trimet riders, are still talking about it.

Today there is a moving memorial at the Hollywood train station.  Lat week I took time to take it in.  The words and pictures speak for themselves.    A woman sitting next to the train station asked “Would you like a rose?  I don’t need them all.”  I am feeling the love.”  She handed me a rose.  It took me back for a minute.  What love was she referring to?  I thanked her and continued to look at the signs and walls at the station.  Then I understood. 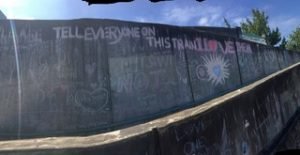 “Tell everyone on this train that I love them!”

Hearts on the fence overlooking the train. 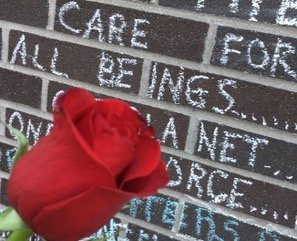 “I am feeling the love.  Would you like a rose?”