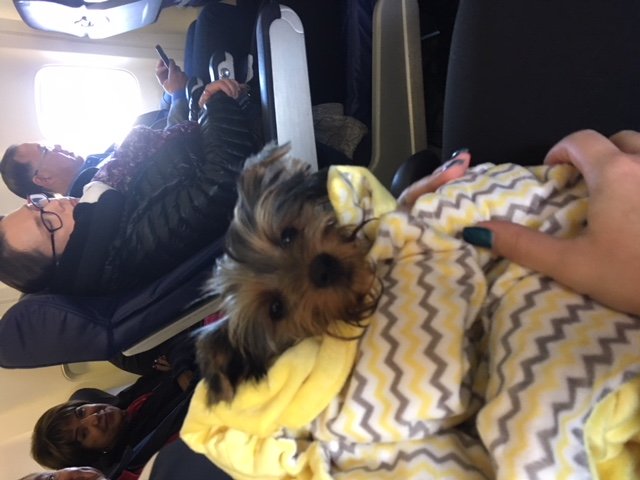 I wanted to find a seat near the entrance to the airplane.  Strategic it was; it didn’t take much calculating.   Row five was closer to the exit door than taking  a seat way in the back.   A middle seat was open right next to a woman who boarded the airplane with a puppy.  So, how could I not sit next to her?

The dog was in a carrier and neatly tucked away under the seat of the person sitting in row four.  In fact, I wouldn’t have known that a puppy was on board if I hadn’t recognized the woman sitting in the aisle seat.   While waiting for the airplane to arrive at the gate years of age., she took the fifteen week old terrier out of the carrying case to show it to a little girl who didn’t look older than two.   The little girl’s mother was teaching her how to gently pet the puppy.  The baby dog was patient as the little hand found its way on his back, ears and head.  It was a sweet sight to see!

As the airplane backed away from the gate, the woman put her hand into the carrier and lightly touched the animal.  After the airplane took off, she took the dog out of the carrier and wrapped him in a blanket.  Then she sat the little one on her lap, face up with only his head exposed.  The little furry face with its young eyes seemed to be aware of his surroundings.  You can bet that we humans were watching him!   I couldn’t help notice smiles on the faces of the two women sitting across the aisle and the couple sitting in the seats behind them.  Even the airline employee who walked by, couldn’t resist smiling and greeting the dog.

Puppy Is A Christmas Gift

The woman sitting next to me was delivering  the puppy to its new family.  She and her sister have a business breeding terriers and other small dogs.   They only sell to people whom they trust will take good care of the dog and provide a loving home.  If their gut doesn’t say YES, a dog is not sold.    It doesn’t take either long to decide if the customer is sincere about caring for and providing a great home for the puppy.

The little one on this flight was a holiday gift for a twelve-year-old boy.  This puppy stole the hearts of several on the airplane and would undoubtedly do the same with its new family too!  By the way, did you dear reader, fall for this puppy too? 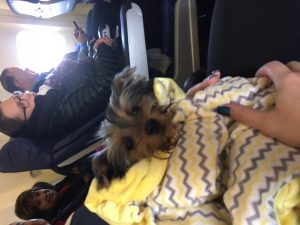