The call came in early one afternoon.  It was my neighbor who has become my friend.  We are different and not just in years.  It is our outlook, politics, experiences, point of view.  Yet, not of all this seems to make a difference.  We like each other, and never grow tired of talking about all sorts of things.   We teach each other, bringing our two worlds together, opening up possibilities and viewpoints that force our minds to grow.  Both of us benefit.  Both our lives are richer because we have taken time to get to know each other.   There is a trust and respect that has developed.  Yes, it is a precious connection.

Young Woman With A Kitten

He was worried and his concern was in his voice.  It was easy to detect.  He said my name and then paused.  His voice dropped and he spoke slowly.  “There is an old  Volkswagen across the street, and a young woman is in the car  with all this stuff.  She has a young kitten.” He continued and told me that he had been watching her on and off for hours.  He wondered out loud how she could stay in the car so long without getting out to go to the bathroom.

I was both curious  and skeptical,  and marveled at his details.   He had a lot of information.  How did he know all this?  He had some really good eyes if he could see across the street into the car.  So I just asked. “How do you know all this?”  He answered that he could see her from the kitchen window.  Even though it was plausible  I was  still too stunned to respond.

“Did you talk with her?” I inquired.  He had not.  He didn’t want to go up to the car and risk frightening her.  “You know an old man peering in” he said.   (He may have said something about dirty old man peeping into a car of a young woman).  He was considerate and practical  in his approach.  “I thought that it might be better if you went up to her.”  It was more a request than a question.  I could tell that he was worried, and I was impressed by his consideration for this stranger.  There was no way to say no.

I agreed and walked up the street  to talk to this stranger in the parked Volkswagen.  I was a little nervous at the prospect of talking to her.   I didn’t know if she was safe, if it was safe  to approach her.  Would I need to call the police?  Was the woman sick?  Was she homeless?  Would she be angry?

woman with a kitten on her stomach

It wouldn’t take long to get some questions answered.  I gently tapped on the car window and woke up the woman who appeared to be taking a nap with a very young kitten sleeping on her stomach.  “Are you okay?”  She smiled and said “Yes.”  I didn’t want to pry about all the stuff in the car, wondering if the car was her home.  I didn’t ask if she was hungry.  I pointed down the street in the direction of the park to tell her that there was a public bathroom there.  She thanked me.  “Take care” I said as I walked away.

I was shaken.  It appeared that the woman was living in her car.  I hoped that this wasn’t the case.  Perhaps, I thought trying to comfort myself, the woman was moving.  I imagined that she just needed a little sleep before moving on to her next adventure.  The alternative was more than I could bear. 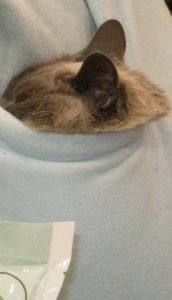