Gardens are the best possible source of veggies.  Freshly picked produced has the most nutrients and arguably tastes better than store-bought produce.   Aside from air and water pollution, you can control your own soil.  I have read that three days after the vegetables are picked, 30 percent of the nutrition is lost.  I do not know if that is true.  What I do know is that farmers market produce looks fresher than store-bought produce, even a week after it is purchased.

However, practically speaking, we cannot grow all that we need in our gardens to feed us even if we have the space.  Moreover, not all produce can be grown anywhere depending upon growing climates.  This makes us dependent upon local stores.

Some people only like to purchase and support local growers and join/belong to a CSA..  These three letters, CSA (community supported agriculture), also refers to a particular network, or association of individuals, who have pledged to support one or more local farms, with growers and consumers sharing the risks and benefits of food production.  Members pay for quarterly , semi-annually and sometimes annually for the produce that is picked and delivered to a location, sometimes to a customer’s door.

Recently I was inquiring about local CSAs for a friend.  I called a food co-op that I have been a member of for more years than I can remember and have been shopping there even longer.  I was given a name of a reliable CSA.  The person on the phone didn’t have the telephone number, but assured me that I could find the company online.  As I ended the conversation, I looked on the computer.  There it was, Wobbely CSA.  That was easy.  So I thought.

“Yes We Deliver To Your House”

I was in lucky.  A person answered the phone.  How nice!  “Yes we delivery to your house.   We have been growing organic fruits and vegetables for more than 30 years.”  In the next minute or two ,I learned that there were two size boxes that customers could choose from and select their own produce.  There was no commitment no contract.  Have your produced delivered for as long as one wants to subscribe.  Wobbely allowed its customers this freedom. One simply had to go to their website and select the size box, choose produce and provide an address and contact information.  Easy.

“Do You Grow Celery?”

As I hung up the phone, it occurred to me that this was more than entertaining.  Two Wobbelys, both CSAs.  Both companies were CSAs.  How often does this happen?  I had no answer to this question.  Somewhere some statistician could provide an answer.

I called back the co-op in Portland and told the person who answered the phone  what happened.  “That is hilarious” she said without laughing out loud.  It was obvious that I had called the wrong Wobbely. “It is called Wobbely Cart”she told me.  Cart oh yes.  I had forgotten the second word and it had made all the difference!

Ok close but not close enough.  Back to the computer to find it and there it was Wobbely Cart in Rochester, Washington.  I called and a man answered.  Yes, I had found the right place.  I told him the story about the other Wobbely. He too was amused and he too did not laugh.

Yes Wobbely Cart does deliveries, but not all year.  The seasons and produce dictate their business.  And no, they do not grow celery. 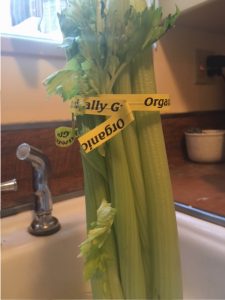