It is usually the same story.  That little voice speaks and you, the receiver, proceed to ignore with it.  You “diss” your devoted inner friend with a never mind, well, whatever, what difference does it make.  How often do we think that we know better?  Or are we dismissive with our self-talk “How bad can it be?”

I did that twice recently and one could have been a problem.  I will save the second “story” for another blog.

The cup was not mine and I admired it’s beauty nonetheless.  (Observe that I write no longer, because the cup is no longer standing solid.)  I wanted to touch it, feel its solid beauty, enjoy sipping a delicious and fragrant tea.  So, I asked the owner of the cup permission to use cup.  Even as I asked a nagging voice said “Don’t.” I did.  The beauty reached into me.

The cup was taken into the next room and placed on a table in the living room.  The owner of the cup poured some sacred tea into the cup.  I was spoiled and I didn’t mind being served.  It was an honor.   My server left me with the teapot as she disappeared from the room to leave for work.

My computer had my attention.  I was in the middle of a writing project.  I looked at the teapot and decided that it had enough tea in it that I didn’t have to put my finger on the lid and hold it down while I poured the liquid into my cup.  Instead, I lifted the teapot and slightly tilted the pot in the direction of the beautiful cup. Suddenly, the top of the teapot fell into my cup.   I did what most people would do, I think!  I  immediately put my hand into the cup to remove the teapot lid.  That was easy.

I went into the kitchen to wash the cup so that I could have more tea.  I looked into the cup and noticed a crack in the cup.  My blood pressure spiked.  Guilt moved inside and took up residence.  It brought up “old stuff.”  Confession time.  In the recent past, numerous cups and plates were chipped and broken because of my impatience to complete a task.

So was it my carelessness or was the cup already cracked?  My mind began to do “play back.”  I rewound the events and couldn’t come up  with the answer.  It was the owner’s birthday and I possibly cracked her beautiful cup?!!  I did the only thing that I could do and that was to take a picture of the cup and see if I could find it somewhere.  Had nowhere or no place to look so I showed the picture of the cup to my relative.  Believe it or not, she had seen the cup and knew where to buy it!!

I need to tell her and not hold on to this secret I told myself and my cousin.   She would have done it immediately, and I admire her for it.  I was too horrified that my sloppiness could have caused another casualty.   So I did tell the keeper of the cup as soon as I had a chance.  Guess what?!  The cup had already been cracked before I even  used it.  Had I only listened to the voice that said “Don’t.” 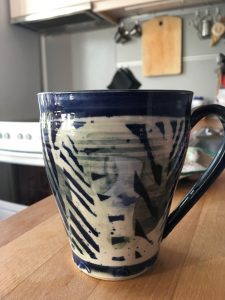