In the middle of last month I wrote on Facebook that my laptop computer of seven years was in the throes of taking its last breath. This isn’t interesting in and of itself. Seriously, computers and, laptops in particular, have a short lifespan do to a variety of human handling and mishandling coupled with inferior computer parts. What may have been interesting or amusing to my Facebook friends reading the post is that I described it as a death, a loss like a human or a pet. Well, not quite, but it is personal.

We Got To Know Each Other

We got to know each other. We got comfortable. We travelled up and down the western coast of the U.S. We hung out in the Midwest more times than I can count on one hand. We risked the busy and noisy streets of New York and Massachusetts. We even crossed the ocean to England. We were loyal. With the exception of my computer consultants that I pay monthly, no one else had my private passwords or knew the content of my machine. Only my computer was there to witness my writing, my exhilarations, my frowns, and my downs.

Saw Each Other Everyday

Of course, I was attached. We saw each other everyday, often hanging out for long periods of time. The laptop could continue for hours, except when it got hot under the collar and need needed sleep. I, on the other hand, needed a timeout after a few hours.

Dressed in black, it was a good-looking laptop. It made me proud. Many compliments were thrown my way. “I haven’t seen a black one in a long time.” “ I used to own one.” “I wish that they still made them.”

Not too long after I purchased mine, I learned that Apple stopped making them. Several explanations were given. I am not sure that any of them were the right. An employee at a Portland Apple store told me that there was a design flaw with the black computers that could cause a series of cracks in the corners. This did happen to my machine. Yes, three crackers and three times I went to have it replaced with a new and beautiful cover. 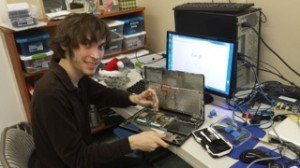 Some people wondered how my laptop computer lived for seven years, when the average lifespan is three to five. Well, it wasn’t a secret. It was an accident. An employee at my Apple store erroneously told me that the machine was fixable and that just needed a new hard drive. Then he did the unthinkable, a very unApple like thing to do. He let me leave the store without making an appointment with the great Genius Bar. These are paid employees who work their magic and know how to FIX the machines. On that particular day the Genius Bar was dizzy busy with a long waiting line. I didn’t have time to wait two days. I left and talked to my computer consultants, and told them what the Expert said. “It is fixable. It just needs a new hard drive.” So, they believed me because Apple said so. Well, it wasn’t so. After a few days, when the computer should have been pronounced dead, it was “brought back from the dead” through the genius brains of my consultants.

It lived another twenty months until Friday, December, 13th, sharing the same month with e Nelson Mandela. My laptop’s demise will go down in the personal history of my life to be remembered as the December that Nelson Mandela died.