Personal victories come in all shapes, colors, scenarios and sizes.  For some, it is finding a parking space in a busy city,   being able to call a five-mile walk a new norm or purchasing a product for less money than was expected.  Perhaps effectively communicating a difficult message can feel triumphant.

Whatever it is for each person, they change as do our lives, and we probably have more of these successes than we realize. We use different words to describe and communicate these triumphs including but not limited to “ I felt good about …,”  “that was the first time….”

Actually Not About Food

Within two days, I had two and they both involved food.  Actually, it wasn’t really about food at all.  It was about asking for what I wanted even when I didn’t think that the answer would be “yes.”  It involved two different situations and the outcomes have given me a little more confidence to ask for what I want.

The first situation happened when I went into an Indian restaurant to enjoy a buffet.  How nice it would be to take a couple of pieces of Tandoori chicken to my mother.  She wasn’t with me and really likes that particular chicken.  I didn’t want a meal for her because she can’t have too much salt, and two pieces would just suit her fine.  My thinking began with a negative. They aren’t going to allow me to take two pieces because restaurants don’t let people take buffet food home, or so I told myself.  In my head, I began to negotiate and justify how I could get the two pieces without having to buy an entire meal.

I imagined a way without having to ask.  I had a stainless food container that I use when I take food with me to various places so that I avoid gluten, sugar and dairy products.  I looked at the container that was sitting on the seat next to me and decided that I could put two pieces of the Tandoori chicken into the container.  I rationed taking the food because I wouldn’t take any of the bread that came with the meal.  Somehow my brain wanted to justify taking chicken because I wasn’t going to have bread!!  Wait. I stopped myself.  That is stealing!  Why don’t I just ask?

So, I did.  As I went into the restaurant and walked to a table to sit down, I asked the waitress if I could take two pieces of chicken. I was told no.  Could I buy a couple of pieces of chicken and again I heard no.   Okay I thought.  No is no.

I didn’t give it much more thought and enjoyed the buffet items.  As I neared the end of the mail, the waitress came over to me and said that she would get a container for me to take two pieces of chicken home.  (Now that her boss had left the building.)

I was floored.  It worked.  I asked and I received.  I thanked her and told her that I had my own container and didn’t need her cardboard box.

The second situation involved oranges.  I needed some, but I didn’t need the five-pound bag that was for sale.  Five pounds would not fit into the refrigerator and wouldn’t be eaten before they went bad.  So I asked “Can I buy a couple of pounds?”  Sure I was told and so I was sold three pounds and was given two free oranges.

These two situations opened my eyes wide to re-examine my ideas when I think that something can’t be. Just maybe they can. 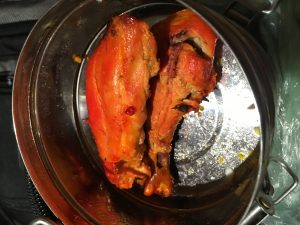