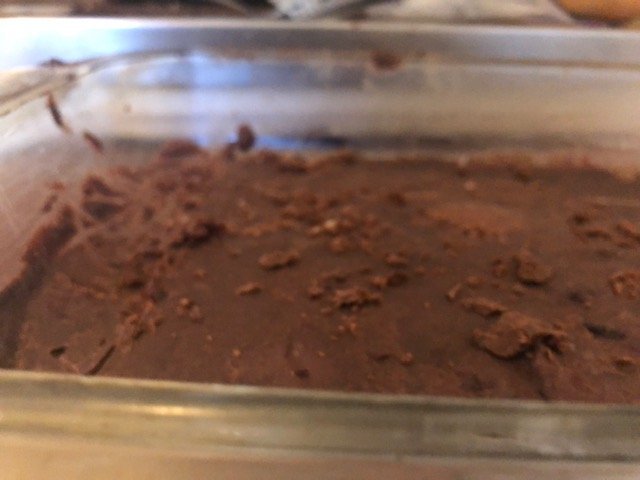 So, I gathered a little courage and took the ingredients out of the cupboard, placed them into a pan and heated and stirred until everything dissolved into liquid. I greased a large glass dish and poured the chocolate mixture into the glass dish. I could almost taste the chocolate. My mind was racing and so were my taste buds.

Chocolate was much easier to make than I imagined. In fact I avoided trying to make chocolate because my fears told me that it would be difficult. A friend emailed me a link to for making chocolate and wrote “It doesn’t look difficult.” I had to take a look. Sure enough the ingredient list was short-cocoa powder, cocoa butter, honey, coconut oil and maybe one or two more ingredients. What did I have to lose? What could be the worst thing that could happen? I would have to toss it . Perhaps it might taste good and look horrible. Maybe it would be inedible.

Here is where I made a mistake, the MISTAKE. I didn’t let the concoction cool down before placing it in the refrigerator. I left it in the cold box overnight and somewhere, sometime in the middle of the night I woke up realizing what I had done. Yikes!!! Dreading what I might find, I opened the refrigerator door the next morning and peaked inside. Yes my intuition was right. The chocolate seriously looked awful. Not joking. I could not imagine eating it, let alone sharing it or sharing it with anyone. It was one large block that was so hard that I had to hack it to break off a piece! That wouldn’t work. So, I decided to do the only practical thing ask for help. It took a logical mind to suggest that I leave the glass pan of chilled chocolate on a kitchen counter until it soften before I cut it. I took the advice. (What did I have to lose?) I did as I was told and then cut chocolate squares. Well, it was delicious, not too sweet and definitely rich in taste!