I was sitting at the train station in downtown Los Angeles waiting for the train to arrive to take me to the Burbank airport.  It was around 1 p.m.   I hadn’t eaten for a few hours and was beginning to get hungry. So, I took out my bland tuna sandwich and began nibbling on it, wishing that I had used more butter or avocado.  The bread was an expensive gluten-free brown rice, the variety that folks who love or don’t love wheat can devour and not expect to get sick.

Suddenly, I had new friends. What, I can’t eat in peace without someone begging?!!!  Then I thought it about.  These feathery ones among us may have been displaced from their homeland.  Couldn’t say for sure, but I don’t know where they came from.  I have seen them in different places in different cities but have never really given much thought to their origins.

Now they wanted some nourishment (or junk food).  All I could share was a tuna sandwich  and expensive gluten-free brown rice bread and it was mine!   Besides, it wasn’t b=very tasty, but I am assuming that only I knew that.   What do I know about pigeons?  Perhaps they knew that my food wasn’t so tasty, right?  It seemed okay to give them a few crumbs.   After all, I could give up something. It was the least that a human could do for a bird that had already given up a lot! 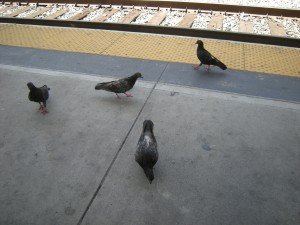