A statistic caught my attention.  Could the following be a fact?   Every month 13,000 people in Los Angeles become homeless.  An estimated 59,000 are homeless in Los Angeles.  I really couldn’t believe it, so I had to ask somebody who might know.   That someone is a long time resident of southern California.  She has lived in the Los Angeles area her entire eighty plus years.    Although she doesn’t have a strong connection with street people, she does have a granddaughter who is absent with no known address.  This woman doesn’t know if her granddaughter is on the street.   She won’t say it loudly and not very often, but from time to time she quietly wonders if granddaughter calls the streets her home.

This senior does take note of television and newspaper news stories about homeless people.   She does believe the number,13,000 new homeless people every month in Los Angeles, is very plausible. It is not only from what she reads but she also sees homeless people almost everywhere she goes.

Shortly after I read this and discussed this with , I stumbled upon a website called Top Documentary films  (http://topdocumentaryfilms.com) and a film called On The Streets.  A reporter  interviewed homeless people.   Everyone should watch this.  It strips away stereotypes of who is homeless and the circumstances that contributed to homelessness.

One might expect a documentary like this might be very depressing.  It would be difficult to argue that it is not a sad problem and one that needs some kind of attention and a resolution.  It was impressive to hear in their own words how these people not only survive but navigate their lives and connect with people in their environments.  The last person whom the reporter interviewed looked into the camera and pointed to his chest.  In essence he said that it wasn’t what is out “there that ” matters.  It is one’s inner world.  You can be sure that intuition is a life skill that many depend upon for their survival and well-being. 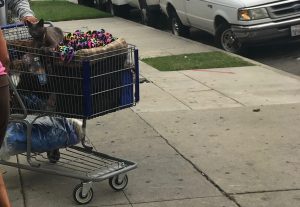