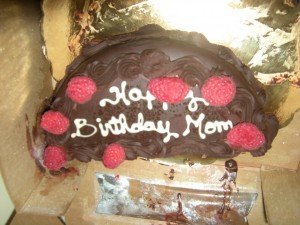 Not An Original Idea

The idea to travel with a frozen cake was not mine. I swiped it from a woman in the Oakland, California airport whom I watch as she stood in line to board a plane with a homemade pie. The pie was made for those lucky people who were eagerly awaiting her arrival. At least that is what she told me. It is an explanation that is easy to believe.
So, it was on a Thursday earlier this month that I decided to take my chances and take a rock solid frozen cake on the plane with me. It was for my mother’s January birthday. She loves dark chocolate of any kind. I would call her a chocolate slut, and if she were in a humorous mood, she might agree. The cake had been frozen for 6 weeks. One would think that this amount of time should do the trick.
At the airport, I placed the box with the cake in a backpack and there it went through the security check. I took the cake box out of my backpack and carried it on the plane. Once I found a seat on the plane, I gently shoved it under the seat in front of me and sat down. This was the easy part.

I wasn’t mentally or emotionally prepared to deal with carrying the delicate cardboard box in busy airports, dodging other travellers. Neither had I anticipated that the cake which had lived in the freezer for most of its life would not appreciate the warmth of the airport or being outside on a sunny day waiting for a train ride to board another city train and then a quick car ride before it would see cooler temperatures again. I began to see little beads of moisture on the top of the cake. I dared not open it. I prayed to the same places and beings when situations of ALL sizes and types crop up as they inevitably do in life.

Exercise in Patience and Navigation

It was an exercise in patience and navigation to avoid any and all potential accidents or mishaps. The adventure went off without any glitches. The only attraction the cake received was from an airport employee, who after taking my boarding pass, asked if anything live was “in there.” He must have taken a second look and with a straight face and asked “Nothing with the chocolate?” The very thought made me sick to my stomach as pictures of worms and other small breathing critters entertained my imagination. I was so surprise that anyone might think that something live might be crawling in the cake that I was without words and could only utter “no.” Seven hours after I began my adventure, I had reached my destiny. The cake and I had arrived safely.

Travelled With Lasagna in Suitcase

This wasn’t the first time that I travelled with food. Eleven years earlier I took a large container of homemade lasagna into my suitcase, and checked it in at the airline counter. It was for a party, and I was trying to save time because I had other food to cook for the event. I didn’t want to spend time cooking lasagna too. The lasagna, which had been frozen for weeks, was tucked away between some clothes that forbade it to move in any direction in the suitcase. The frozen tray, which was tightly covered with tinfoil, was then placed in a plastic bag and sturdily tied shut with a rubber band. It was trapped.

That is where the lasagna and I parted company. I silently said my goodbye and would have crossed my fingers except for the fact that I needed all ten digits on both hands to carry my luggage and board the plane. Yes, it was a gamble, and I was ready and mentally prepared to lose my tray. Surrender had taken place at the check in counter, which is what one must be prepared to do.

Yes, give it up if necessary. The following possibilities could ruin my beloved lasagna tray. These scenarios included this short list of horrors. The luggage became lost. The plane was delayed and arrived hours later causing my lasagna to defrost. Someone mistakenly took the luggage. Fortunately none of these scenarios happened, and I arrived safely with the frozen lasagna in tact.
Now, these two adventures beg the obvious questions. Would I do it again? I would only travel with food again if I could safely pack the food in a suitcase or in a backpack. If you ask if it was worth all the trouble, I would have to answer YES. People who are the lasagna really enjoyed it. Regarding the chocolate cake, I will have to wait a few weeks to see.