I should have known?  Why did I think that it would be any different?  I had to travel a third of the way around the world, away from the west coast of the United States, to learn, to understand the obvious!!

The issue involves a cat.  Please see the pictures below and yes he (Suffis) is just as beautiful and delicious as he looks.  He lives in Oslo, Norway.  I think that he is bilingual because part of his family is from Scotland, and because English is spoken in his presence.  He is a smart cat, not the smartest, but intelligent enough to understand people around him.

Suffis is an indoor-outdoor cat and lives in an apartment building with his humans and seems to have fans and admirers who live in other apartments.  They are quite happy to hold the door open for him to come and go as he pleases.  Some of these neighbors even ring Suffis’ people when he wants to come into the apartment.  So, when the doorbell rings, the occupants often suspect that it is because of Suffis. (It would be so much easier if they gave him a key to the outdoor and the apartment front door, but obviously that isn’t a possibility.)

While I was visiting, it rained and my imagination said silently, but loudly enough for me to hear “No cat wants to be out in the rain.”  So I put on my shoes and went downstairs and opened the door and called to  him in Norwegian.  No Suffis.  I looked in both directions and glanced under the parked cars.  No cat. Well, it was cold, and I wasn’t about to stand outside in the Nordic elements.  (Don’t feel sorry for me.  It was May and was just a little chilly.)

So, up the stairs I went and into the apartment to sit down with a newspaper and a cup of tea. An article about Norwegian society absorbed me UNTIL the doorbell rang.  I was trained and knew what it was.  Suffis wanted to be let inside his castle.  Well, there is no use fighting a feline so I got up and went to open the door.  Sure enough it was Suffis, not so different from my cats who decide if and when they will come indoors. 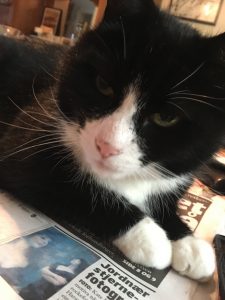