He was amazing.  Lots of people say that about the dogs that they adore. Lots of people find their dogs and others pretty spectacular. And so it should be, shouldn’t it?  The animals that love and give to us so freely and without inhibition surely deserved a little idolizing in return.  Sometimes it goes a little overboard, but that is another story, one that is up for discussion.

LOOK STRAIGHT INTO HER EYES

What made him amazing  and uncanny ability to comprehend and often outsmart those in his life, both people and animals.  That meant that he had to do some pretty sophisticated calculations and evaluations.

I once saw him sitting  up on his hind legs, with the help of his human mom, and  join her in singing.   She would sing to him and look him straight in the eyes and he in turn would keep his gaze, his eyes never leaving her face.  Did he know that she wanted and needed his full attention?  He sang back using his doggy voice. As I watched, I had the feeling that this singing thing was as much fun as chasing squirrels or killing birds in his backyard.  While it may not have made his lists of favorites, he knew that it was important to mom and so he let her sing to him and even joined in.

His name was and still is Simba the seven-year old morkie (maltese and yorkie).  This name seems to suit him from the beginning and that is perhaps why he reminded his people of a lion.   Yes he was fearless. He hunted squirrels and birds and usually one, which meant that their life was taken because of the quick calculations and speedy movements.

Lymphoma took him away but not entirely.  He keeps appearing to me with a set of instructions, usually for his humans.  Anywhere and almost anytime.  Simba is respectful enough not to “knock” on my door late at night or very early in the morning, which I am grateful for. Thank you King Simba.

The messages are quite interesting, and how could they not be?  Someone, who shall not be named here, isn’t drinking enough water.   Ok okay Simba I will call. Those are just about the words that I say to him.  Then of course I have to keep my word and call.  Guess what?  Simba is right.  The defendant is NOT drinking enough water.  One time Simba “called” my attention to let me know that his friend and brother dog needed was having some specific problems with his back. He also suggested a remedy for the situation.  So, once again I call. This time the two humans are at the vet’s office with the brother dog and the message is relayed.  The doctor told me to thank Simba, who once again was accurately helpful.

So you see, this small dog could leap through the air and catch a bird, look right in your eye, I is still dialing in and showing his perceptive nature.  The lion is still observing from some high place and sharing his words of wisdom. 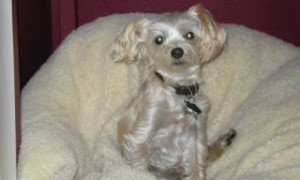