I seldom remember jokes. It isn’t that they aren’t funny. Some are. It is just that I am more likely to remember something that happened to me or to some other human being. Maybe they seem more real to me.

It always amazes me how people look for jokes from magazines, newspapers and from others. It isn’t that these aren’t good sources. No, it isn’t that at all. It is just that there is humor in everyday life all around us if one has his/her humor antenna up and stays alert and ready to receive.

Here are two stories that I am not likely to forget and ones that make me laugh every time I tell them.

The first one happened recently and was told to me over a birthday party luncheon at a relative’s house. The woman of the house has a dear friend named Rita. Those two have known each other many years and have much in common. Both have a love of good food, literature, theatre, family, restaurants and more. They both have shared similar losses, losing a husband and a son within a short period of time. One woman is in her late eighties and the other one is a few years younger. The older woman is from New York and the other one hails from the Chicago area.

New York accent after all these years

The younger woman from Chicago talks about her friend. Rita has a strong New York accent, which startles some who know that she has not lived in the state for many decades. Keep the accent in your mind as you read this. Here is the story. Rita is on her cell phone talking to her granddaughter. She tells her the young woman that she is going into a pawn shop and that she will talk with her later. The granddaughter is worried and calls her father, Rita’s son. Very shortly Rita gets a call on her cell phone from her son “Mom what are you doing in a porn shop?

The next story is one of my stories that still make me laugh when I tell it, some thirty years after it happened. It is about a conversation that took place in a Norwegian language camp for kids in Bemidji, Minnesota. The camp is one of seven language camps and is part of the Concordia Language Villages, run by Concordia College in Minnesota. Kids who attend are immersed in a language, given a name from the country and purchase the currency of that country. In addition, they eat food from the country.

I was teaching Norwegian along with other Americans who had lived in Norway or who had a connection to Norway and along side of Norwegians who had travelled to Minnesota to be part of this adventure. Some of these Norwegians took advantage of this opportunity to travel around the United States before or after working at the camp.

It was a beautiful and peaceful camp in a small town with only a few thousand people off the beaten path and not too very far from the Canadian border. Quiet Lake Bemidji was very nearby the language camp. It was by this little oasis that my story takes place.

One day, I was down by the lake talking to an American woman in Norwegian whose face I can see but whose name escapes me. She had married a Norwegian and was in the U.S. for the summer and had decided to spend some time teaching at the Norwegian camp. This woman told me something and I told her that I thought that she was clever. Unfortunately, that is isn’t what I said. Instead of saving clever I said that was “shit.” The culprit was the letter “d” instead of a “t.” The woman started laughing and told me what I said and I have never forgotten it! 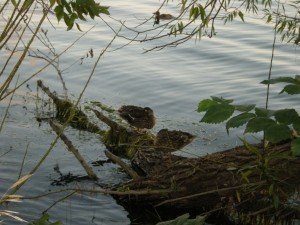