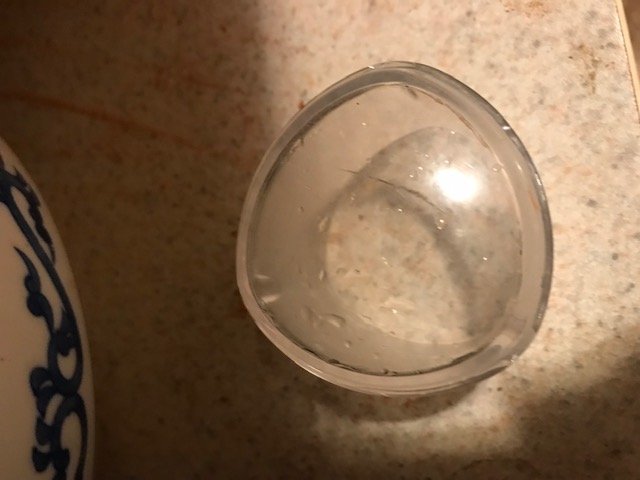 I wasn’t going to write about this because it seemed insignificant.  I am not embarrassed.  I am puzzled.  It begs or invites the question that maybe I didn’t really remember placing it where I found it.  Maybe someone else did. There were only two other people who could have done it and one was not in the kitchen to do it and the other person swears that she didn’t do it and in fact she never saw it to do it.  I have to believe her because there is no reason not to do so.

As with most things I have learned that I am not the only one. I am hoping that someone will read this and leave a comment or contact me to say “I had this happen to me too.” Do share if this resonates with you either by email faye@inner-design.net, or leave a comment.

Here is what happened, and you are going to have to read most of this to understand what happened.   So, this is the blender story but it isn’t really about a blender but the blender is what I know enough to write about. This blender wasn’t mine and one that I would not have chosen to use. It was loaned to me while my Vitamix blender was being repaired and sent back to me. My machine was purchased last spring at Costco and was still under warranty. I had been waiting for the sale all of $50 off the super duper heavy blender which even on sale for a few dollars under $300 was still expensive.  I could rationalize the purchase of the machine if it was on sale. Actually the machine would pay for itself if I used it several times a week to pulverize my wheatgrass into a bright green liquid strained  the contents through a tea strainer and quickly drank it so as not to taste it.  I sometimes squeezed some lemon juice into it which made it taste a little better.   All this was done to help heal my liver, which needed cleansing.  The Vitamix also paid for itself if one made green drinks a few times a week over many months   The Vitamix was great at purifying my greens which usually were a combination of dandelions, celery, cucumber spirulina and a little fruit to disguise the harshness.

One of the best features of this powerful machine is that it is easy, spelled with a capital E, to clean which is a major plus after peeling, chopping and cutting vegetables and fruits to blend.  Some blenders that take longer to clean making it less inviting to use and making it easy for many to say no to juicing.

To say that I have grown attached or dependent upon this is an understatement.  It has become my security blanket and still remains an  avenue to healthier eating.   I was careful to clean it out and dry it well and place it in a safe location where it couldn’t be knocked around or dropped.

It was a busy Thursday afternoon last week when I made my last drink and it was a good one.  It had the right balance of greens (cucumber, cilantro, green chard, celery and spirulina powder and chia seeds) and fruit (frozen berries and one tangerine).  I made enough for the next day so half was poured into a glass jar to refrigerate. I had fifteen minutes to drink the remainder before leaving to visit some neighbors.

I knocked the blender over the counter and the juice spilled onto the floor and splattered on the side of the refrigerator.  It looked like bright green “food art” if there is such a thing,  What a mess! There was no choice but to clean it up.  So, out came the dish towels to clean up the green liquid. It didn’t take but a few minutes to wipe up the floor, the counter, the sides of the refrigerator and a few other places that the green stuff landed on while on its journey out of the blender.  I would call it an escape, or an attempt at one.  It didn’t get very far but far enough to be an annoyance.

All I had to do was to pick up the blender and wash it out with soapy water and put it away.  I bent over to pick it up and notice a part had fallen off and was lying on the floor.  It was a small round piece. I couldn’t imagine where it came from so I tried to reattach it without any luck.

I did what any Vitamix lover would do who had a whole tray of fresh wheat grass in the refrigerator waiting to be juiced later in the week. I panicked. That left alone one thing to do, call Vitamix. The telephone number was easy to find on the internet, and I waited less than two minutes for a human voice to help me.  Not to worry . “We will help you. What is the number on the back of he machine?” I gave it to her and then she wanted to my billing address, which I confirmed. NO charge because of the warranty. “Would you like me to email or send you a shipping label?” Is it quicker if you email me the information. Yes. Ok.  Here is my address.  Sure enough the email came into my email inbox within a few short hours just like I was promised.

All I had to do was to get a shipping box and put the blender and the machine in a box.   A neighbor had a box that was just the right size so packed it with newspaper, paper bags that had been saved for recycling.In went the machine with the container and on went the tape to seal the box.  It was ready for shipping.

SMH- Save My Health

I sent an S.O.S. which really could have been translated to save my health (SMH ) and a friend lent me her blender.

( I had no urgent health issue but have been working on improving my health for the last year and a half.  That included making dietary changes,)  It wasn’t a powerful machine,  The brand name told me that it would do what I needed it to do but not much more. It had one flaw. The plastic center lid that fitted inside the top was broken so that it couldn’t fit tightly inside the top.   So I compensated by holding the piece in place while I blended.  I gratefully used it for a few days, washing it daily after I used it and placing it back on the counter.

It Was Time To Surrender

After using it for a few days, I placed it back on the counter to store it until I used it the next day. It fell on the counter and the loose plastic piece went flying. It was small and clear and had to be somewhere. I checked the floors and the dish rack. It was nowhere to be found. Hmm.  Strange.  It wasn’t in the trash can so I knew that it had to be somewhere. For the next two days I continued searching.  I even checked the cupboard where I put plates and cups knowing it was highly unlikely that it would be sitting on the shelf.   Nowhere. It had to show up. I It was time to surrender.  A few days later I opened the cupboard to put away some pans and there was the clear plastic lid sitting in plain sight. If it looked like it was waiting for me. How could this be? I have been putting pans and pyrex dishes away everyday and it wasn’t on the top shelf. Who put it there? 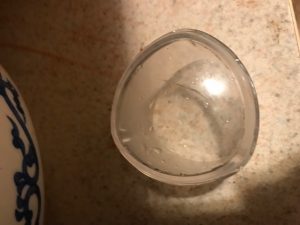 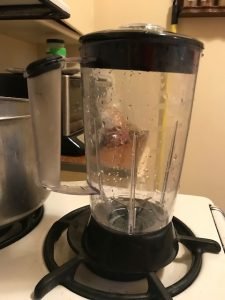